Founded in the days after the 2016 election, Stand Up is a grassroots community of 2 million strong.

Standing up for our values

Stand Up America began in the weeks after the 2016 election, when hundreds of thousands of concerned Americans came together online to organize and resist Donald Trump’s dangerous agenda. Stand Up’s community has quickly grown to over two million Americans, across all 50 states, who are taking action and making their voices heard daily.

Hundreds of thousands of progressives in the Stand Up America community have contacted their members of Congress by phone, fax, and social media to stand up to Trump’s corruption, defend health care, and protect the Trump-Russia investigation.

Wide Eye has had the opportunity to steadily collaborate with the Stand Up team since January of 2017 on the creation of their entire visual brand, two website designs, and a series of impactful digital campaigns.

The conventional approach to design in U.S. politics has always been to go “red, white, and blue” — to wrap candidates and issue-based campaigns in the American flag. But with the election of Donald Trump in November of 2016, that convention suddenly felt stale. Working with Stand Up America in the weeks after the election, Wide Eye was tasked with developing an identity and brand that was urgent, inspiring, and authentic. With Trump (and Trumpism) as a very real threat to American Democracy, being deferential or speaking too softly was no longer an option.

Building off of Stand Up’s early decision to use the image of the Statue of Liberty, Wide Eye designed a logo and identity that was as once reminiscent of a DIY spray-painted stencil or event poster, and also able to work at smaller sizes for social media. Stand Up’s intention was to build a community and the logo needed to reflect that grassroots effort.

We employed a stark black and white color palette to convey the crispness of Stand Up’s sense of moral clarity, and selected Hoefler & Co.’s confident Tungsten Bold typeface for both the logotype and headlines. We also punctuated the otherwise stark Stand Up aesthetic with a vibrant secondary color palette, inspired in part by the dramatic display of colorful post-it notes in New York City’s Union Square subway station that popped up shortly after the election. 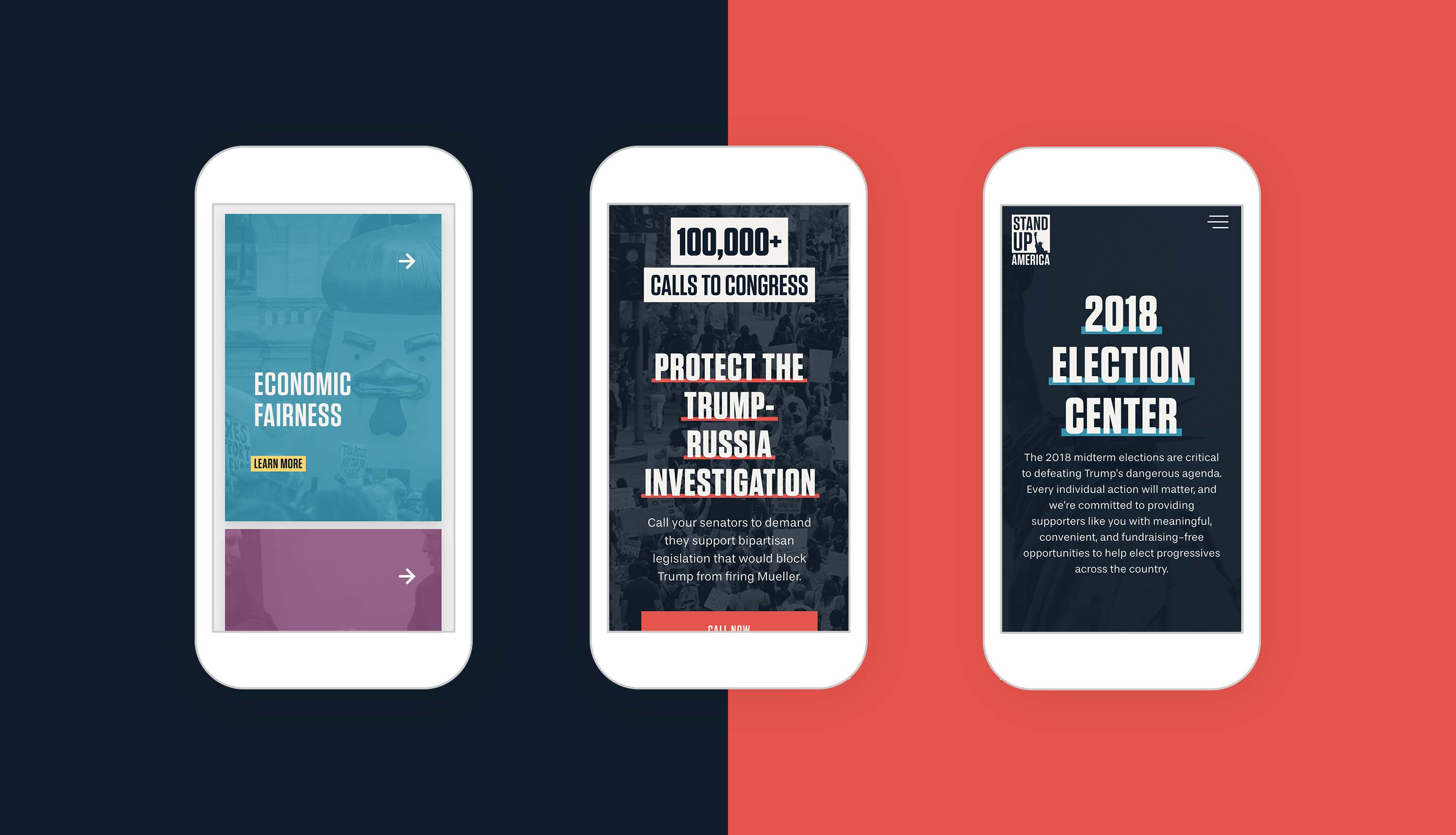 A toolbox for action

The Stand Up America website states its purpose and its values clearly. The design is highly modular, and is setup to change and grow along with the news cycle.

A toolbox for action

The Stand Up America website states its purpose and its values clearly. The design is highly modular, and is setup to change and grow along with the news cycle.

Building on our early art direction and branding rules, Stand Up has been able to make their robust social media presence powerfully visual and consistent. The examples below reflect some of Stand Up America’s own in-house graphics inspired by our work. 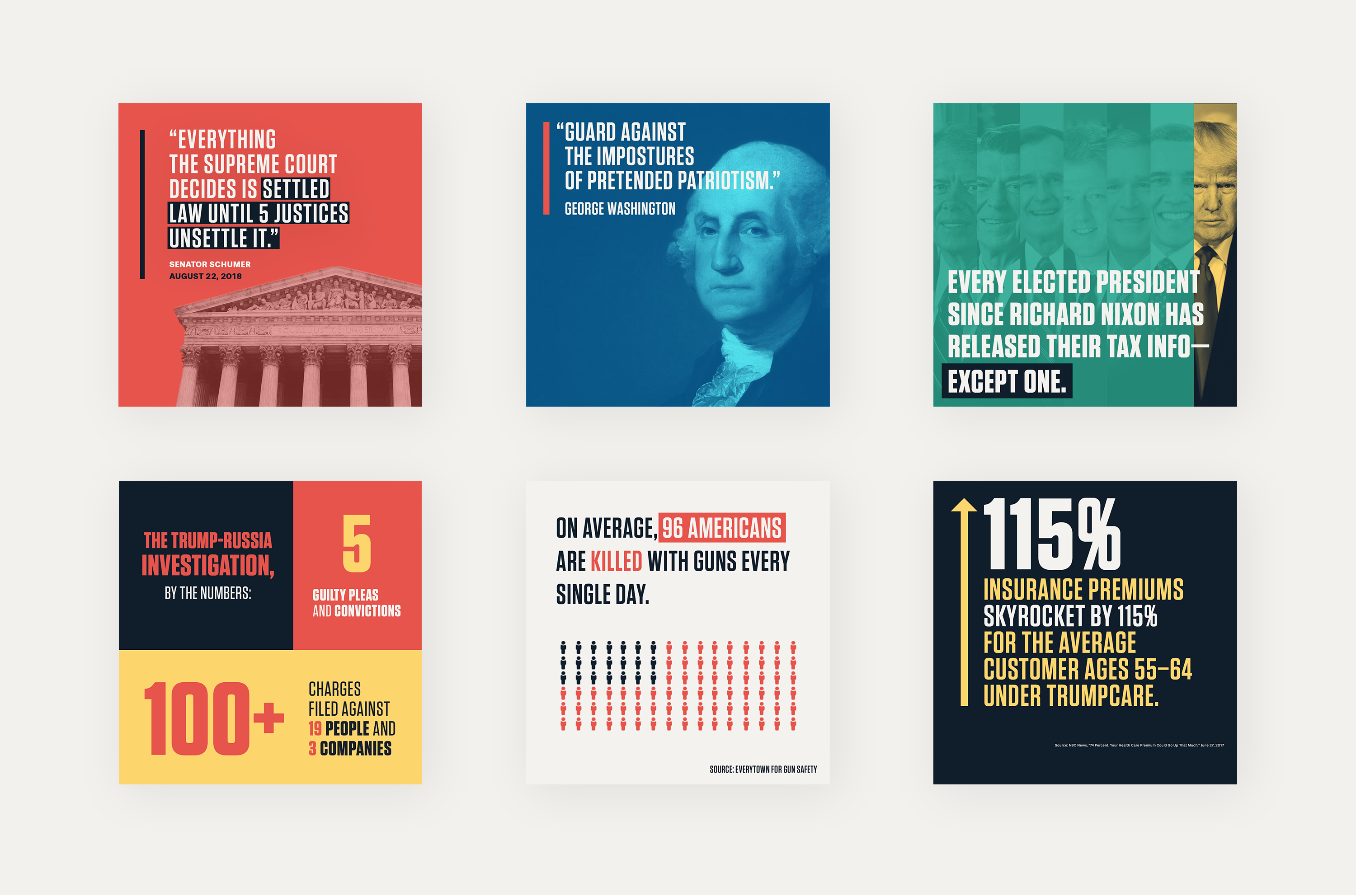 The Stand Up America community continues to grow at a stunning rate. They are frequently testing new technologies and innovating new approaches to running campaigns, building their digital operation for the fights ahead.

Changing the world? Let’s work together.

Looking for a career making a difference in the world?